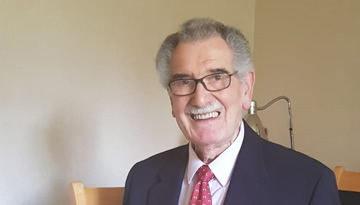 Wombourne Parish Council is mourning the loss of a respected, long-serving Councillor who has sadly passed away.

Reg came into political life really as a dedicated supporter of his late wife, Joan. Joan had already had a long career as a Parish and District Councillor, serving as Parish Chairman four times. Upon his retirement, it was therefore quite natural for Reg to step into a life of public service; a commitment that he maintained after Joan’s passing.

Reg was a font of knowledge, whether of local history and geography, or many more diverse topics. He was an avid railways enthusiast and model-maker. Crafting objects, painting or doodling away on a notepad were some of his favourite pass times and as everyone that knew him will recall, he had a razor-sharp sense of humour and a cheeky smile.

Cllr Williams held an encyclopaedic knowledge of planning, and despite stepping down from the role as Chairman of the Planning Committee earlier this year, he remained as the Committee’s Vice-Chairman due to the esteem in which he was held in the role and because of the wealth of experience he brought to meetings.

Our Chairman, Councillor Dan Kinsey, reflected on Councillor Williams’s life of service; ‘Councillor Williams was a unique individual; warm and kind, friendly and utterly disarming. He was a charming man. He served his community with dedication, as did his beloved Joan. They were quite a team. Personally, I will never forget how, as a new member, he took me under his wing and supported me a great deal, such was his generosity. Formidably quick-witted, even at 90 years of age, he could break the ice, or tension, with a single line. Reg was a good friend, and we shall all miss him dearly’.

He will be greatly missed by all that knew him.

The Parish Council wishes to extend their deepest condolences to Councillor Williams’s family at this sad time.

Our office will be open the following times: